Porcine study #1 was conducted at a leading research facility in the Boston area. In addition to the facility staff (veterinarians, technologists, and Study), our on-site team consisted of Emergency Medicine and Anesthesia physicians working alongside mechanical design, manufacturing, controls, and electrical engineers. The goals of this study were as follows:

The study was conducted with two Yorkshire swine between 25 – 30 kg. One was ventilated using the Puritan Bennet and the other using the MIT Emergency Ventilator.

We collected volume and flow profiles over time using a consumer grade spirometer inline with the breathing circuit of the animal. Note: This spirometer was placed so that it measured both inspiration and expiration. We collected ~10 seconds of data (several breaths) to evaluate respiratory mechanics. A sample data set is shown below.

Settings: Variable, adjusted per observation as part of hardware testing.

As described in the list above, our data showed some of the deficiencies in our original design. Specifically, in the example figure below (around the 5-second mark) the motor was not able to reach its final encoder position and stalled out. There was insufficient expiration time prior to the next inspiration, leading to breath stacking where the volume doesn’t quite reach zero and the following inspired breath gets added to the previous one. 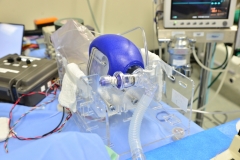 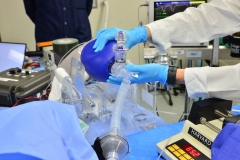 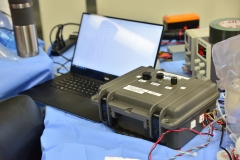 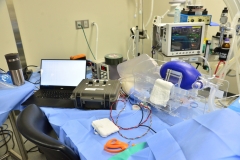